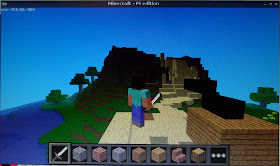 I had this idea about using Minecraft: Pi Edition and its API to show how trigonometry, mechanics and mathematics can actually be useful and given that everyone likes to blow stuff up....  I thought I would make a cannon.
A cannon which could point in any direction (0-360 degrees), angle upwards (0-90 degrees) and when fired would send a cannon ball upwards, falling in-line with the laws of gravity and then explode when it hit the ground.

I liked the idea of a command line interface, its a cannon after all they are not meant to be hi-tech devices, to control the cannon you use the following commands: